J. Dudley Butler has resigned as administrator of USDA’s Grain Inspection, Packers and Stockyards Administration, effective next week, USDA confirmed today. His resignation brings to an end a controversial tenure marked by an attempt to toughen regulations on livestock and poultry marketing. 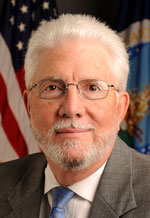 “I want to thank J. Dudley Butler for his outstanding service as Administrator,” Secretary of Agriculture Tom Vilsack said in a statement. “President Obama and I believe fair and competitive markets are critical to the success of American agriculture, and Dudley has worked tirelessly to advance this cause. USDA looks forward to continuing this work on behalf of our nation’s producers.”

END_OF_DOCUMENT_TOKEN_TO_BE_REPLACED

January 13, 2012 from www.meatingplace.com — reprinted by permission

WASHINGTON — President Obama announced today he would ask Congress for the authority to consolidate several federal agencies dealing with trade and business development, including the Office of the U.S. Trade Representative (USTR), which negotiates agreements covering exports of beef, pork and poultry among many other products.   Concerns were immediately raised that the consolidation could hamstring efforts to promote U.S. trade.

Also affected by the consolidation would be the Commerce Department’s business and trade functions, the Small Business Administration, the Export-Import Bank, the Overseas Private Investment Corporation and the Trade and Development Agency.

“We’d have one department where entrepreneurs can go from the day they come up with an idea and need a patent, to the day they start building a product and need financing for a warehouse, to the day they’re ready to export and need help breaking into new markets overseas,” Obama said.

END_OF_DOCUMENT_TOKEN_TO_BE_REPLACED

Was William Shakespeare the author a role played by William Shakespeare the actor? The question is posed by “Anonymous,” an earnest and occasionally entertaining historical drama directed by Roland Emmerich. The film’s answer, that the plays, poems and sonnets of Shakespeare were in fact the creation of Edward DeVere, Earl of Oxford, is a popular but utterly improbable theory embraced by those who cannot believe that a man of only modest education, and little social standing, could have created one of the pillars of the English language. “Anonymous” will persuade many conspiracy theorists but few who understand that genius does not require membership in the upper class.

Was this man an illiterate fraudster?

The William Shakespeare depicted in the film is an actor who can read but cannot actually write — not just in the literary sense but literally: he cannot form letters on paper.  But he is money-hungry and keeps an eye out for the main chance, and he sees it when DeVere begins to stage his plays through Ben Jonson, also a notable literary figure in 16th century London.  Jonson is reluctant to lend his name, so the plays are produced without a designated author; when the enthusiastic audience cries, “Author!  Author!” Shakespeare steps forth, much to Jonson’s chagrin. Thus begins a spectacular run of successful plays which Jonson and Shakespeare obtain from DeVere, who has spent his life writing plays which he feels it would be too déclassé to produce. END_OF_DOCUMENT_TOKEN_TO_BE_REPLACED

The baseline will last about six months, the agency said.  The study will provide the government and the industry with “data concerning the prevalence and quantitative levels of selected foodborne pathogens and microorganisms that serve as indicators of process control,” FSIS said in a notice released Monday.    The notice is available at http://www.fsis.usda.gov/OPPDE/rdad/FSISNotices/04-12.pdf.

USDA inspection personnel in each participating plant will collect samples of raw, unfrozen parts, shake them up in solution to get rinsate, and ship bottles of rinsate to a laboratory in Texas.

END_OF_DOCUMENT_TOKEN_TO_BE_REPLACED

The Food and Drug Administration is moving to ban many extra-label uses of cephalosporin drugs in cattle, swine, chickens, and turkeys, saying the drugs may cause failure of antibiotic treatment of life-threatening infections in humans.  The industry says FDA has little evidence that a problem actually exists.

“Antibiotics are a valuable tool in ensuring animal health and in producing wholesome food for the consuming public,” said Tom Super, vice president communications of the National Chicken Council.  “We question any substantive link or scientific basis between veterinary use of cephalosporins and antibiotic resistance in humans.”

FDA announced Wednesday that it will publish a notice in Friday’s Federal Register prohibiting the use of cephalosporin drugs in food animals for disease prevention purposes.  The agency said it would also restrict other uses of the drugs to the doses, frequencies, duration, or routes of administration that are already approved, and also to the species and production classes already approved.

END_OF_DOCUMENT_TOKEN_TO_BE_REPLACED

One of the little hobbies is trying to get letters to the editor, over my own name, into the Washington Post.  I’ve been pretty successful.  Here’s the one the Post published on Dec. 31, 2011, under the headline “‘Old’ Matters to Virginia:”

Virginia’s nickname is “The Old Dominion,” not the “Dominion State,” as Michael Leahy wrote in reporting on Newt Gingrich’s failure to get on the state’s Republican primary ballot [“Gingrich faces long odds to compete in Va. primary,” Dec. 26, news story]. Since Virginia is not actually a “dominion” (it is confusing enough that the state is, in fact, a “commonwealth”), the key is the adjective “old,” because the name is rooted in the 17th century. So is much of the state’s political culture.

It reminds me of the joke: How many Virginians does it take to change a light bulb? Three – one to change the bulb and two to talk about how good the old bulb was.

The Washington Post ran my letter about its proclivity for endorsing nearly all the Democrats on the ballot.  Good for them to allow a dissent, however droll:

After reading your endorsements in the Virginia General Assembly races, I suggest that The Post could save space in the newspaper, and the time and energy of editors and readers, by running a single editorial that begins, “With the following exceptions, we endorse all the Democrats,” and then lists those few Republicans and independents upon whom your favor has fallen.

It would not be a long editorial.

There are many different ways to kill a man, and some of them are demonstrated quite graphically in “Drive,” ranging from slashing with a razor to stabbing with a curtain rod. The only one that did not involve copious amounts of blood was drowning.

Ryan Gosling plays an automobile mechanic in Los Angeles who works occasionally as a stunt driver for the movies and moonlights as a getaway driver for stickup men. He guarantees them five minutes of police evasion in a souped-up car, and then they are on their own. But then he discovers Irene, played by Carey Mulligan, who’s both lovely and lonely, and he resolves to go straight and start a new life. Their romance develops slowly since Gosling channels his inner Gary Cooper and plays the Driver (no name is ever mentioned) as the strong, silent type. He probably had little trouble learning his lines since there are so few of them.

END_OF_DOCUMENT_TOKEN_TO_BE_REPLACED

A review by Richard L. Lobb

The new movie “Contagion” had its Washington preview screening Tuesday night (Sept. 6). The good news is that the disease is NOT bird flu and is not spread by birds. It seems to be some sort of influenza/encephalitis that combines a pig virus with a bat virus. It is dubbed MEV-1 and and is said to have been created when “the wrong pig met up with the wrong bat.”

At the very end, it turns out Gwyneth Paltrow got it from the chef who got blood and saliva on his hands from a pig that got it from the bats when the bats were disturbed by the bulldozers at the factory groundbreaking that Gwyneth Paltrow was in China to attend. Capitalism causes all kinds of problems, you see. END_OF_DOCUMENT_TOKEN_TO_BE_REPLACED

Misuse of the indefinite noun “scores” prompted me to write this letter to the Washington Post, which was published July 23, 2011.  The headline above was in the paper while the one below was on the website:

“Big deal,” I thought, when I saw the July 15 Sports headline “Redskins unable to sell scores of tickets.” After all, a “score” is only 20, and “scores” usually means “we’re not sure, but maybe a hundred,” as in, “Scores of brides-to-be waited outside Filene’s,” something like that. But it never means “10,000,” which is the Washington Redskins’ rather amazing predicament.

If you need a short, indefinite noun, “scads” would be a better pick, or “hordes” or “a ton” (which would go well with “tickets”). But not mere “scores,” which is closer to the number of coaches Dan Snyder has hired than to his legion of disgruntled fans.