There’s something about chicken nuggets that children love and food purists really hate.  Since McDonald’s came out with the McNugget worldwide in 1983 and created the category, critics of the modern food system have repeatedly jumped on the fact that nuggets are not exactly health food.

“When it comes to childhood nutrition, few foods are as unhealthy and insidious as the chicken nugget,” Tara Parker Pope wrote in the Wall Street Journal in 2004. 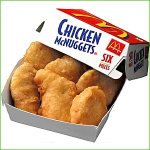 Is this what’s making Mississippi fat?

pounds for his 2004 documentary, “SuperSize Me.”   Spurlock also launched the spurious notion that nuggets were made from “old chickens” that could no longer lay eggs and are ground up into a “mash.”

A blog posting on that theme made the rounds a few years ago, supported by an authentic video showing the production of mechanically separated poultry (MSP), which consists of bits of meat squeezed off the frames (bone structures) of turkeys and chickens. The resulting paste-like product is used in frankfurters and other “pegboard” products but is not typically used in nuggets.  But the blog insisted not only that MSP is used in nuggets, but it is treated with ammonia to kill germs – which is also untrue.
END_OF_DOCUMENT_TOKEN_TO_BE_REPLACED

After years of hesitation, the U.S. Department of Agriculture is moving ahead with a plan to take inspectors off the evisceration line at chicken and turkey slaughter plants.  Since the 1950’s, inspectors have stood at fixed stations on the line and checked every chicken carcass that came along. (About one every two seconds, usually.) They were supposed to touch the carcass in a certain way to check for evidence of bird disease, look for bile or fecal contamination, and otherwise make sure it was wholesome.

Trouble is, most poultry diseases have been practically eliminated.  The concern in recent years hasn’t been for poultry diseases, but for microbial contamination such as Salmonella.  And you can’t see or feel Salmonella cells no matter how hard you try.