In the new movie “Spotlight,” the Boston Globe takes the long-running, episodic story of sex abuse in the Catholic Church and discovers how it was covered up for years by the church hierarchy, the local establishment, and a pliant legal system. The Globe blew the lid off the scandal with consequences that reverberate today.

As with “Apollo 13” or “Captain Phillips” or other movies based on actual events, the interest is not in how the story turns out but in how skillfully it’s portrayed. “Spotlight” is carried by exceptionally good acting by every member of the cast, bar none. The lead actors are perfect. Liev Schreiber is the new top editor who wants to know why the story has been so little reported. Michael Keaton is the investigative editor who realizes that he has to atone for previous journalistic lapses. Mark Ruffalo is the ferocious young reporter, while Rachel McAdams is the sympathetic journo who gets the victims to open up. 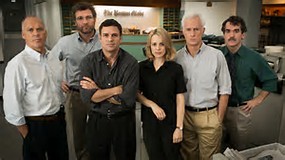 The supporting cast is nothing short of extraordinary, since every single one of them is perfectly believable in the difficult task of portraying the victims of horrid crimes – or the perpetrators. My favorite might be the hapless Father Paquin, who answers a reporter’s knock on the door and immediately, right then and there, standing at the door, admits he molested children. But, he says, it wasn’t important because he derived no pleasure from it. Then his sister rushes to the door and pulls him back, and in her few seconds on the screen, perfectly portrays a harried old woman who is utterly sick of her demented brother but still completely protective of him.

The film is full of such performance gems. The only people who seem to be acting even a little are those who in real life really were acting, desperately trying to hide the truth and protect the church from a devastating scandal.

The film is sort of a police procedural about how the Globe’s “Spotlight” investigative team cracked the case. The church did its best to keep the facts out of public view, mostly by settling cases out of court. Stymied in their attempt to identify abusers, the reporters stumbled upon a Rosetta Stone published by the church itself: the annual directory showing where every priest in the archdiocese was assigned. Analysis showed which ones were being shuffled from parish to parish or sent to treatment centers and listed as on “sick leave” or “unassigned” or the like. Thus the church’s own phone book served up nearly 90 suspected perverts.

The Globe’s blockbuster story, published in January 2002 (appropriately enough on the Feast of the Epiphany, the “revelation” or “showing forth”) put the church’s sex abuse scandal squarely into the public eye and brought about overdue reforms nationwide. The film is a tribute to the type of investigative journalism that is fast disappearing with the collapse of big-city newspapers. It is also a memorial to the victims whose youthful innocence was stolen by truly evil men.